Earth is not the lone place in the Solar System that possesses oceans, seas and lakes. One of the more astonishing recent discoveries in planetary science is that oceans are common in the Solar System and that extra-terrestrial lakes and seas exist, even if in a different form with respect to terrestrial analogs. Observations from the NASA 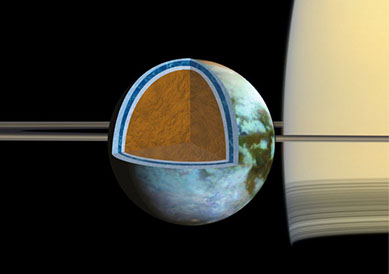 Galileo and NASA/ESA/ASI Cassini-Huygens missions have provided evidence of subsurface oceans covered by ice shells with different depths from the surface on several moons of Jupiter, Europa, Ganymede and Callisto and Saturn, including Titan and Enceladus. Titan presents standing bodies of liquid hydrocarbons at the polar regions forming seas and lakes and an active hydrological cycle based on methane. Recent observations of Pluto and its moon Charon by NASA’s New Horizon have shown surface geology that may be indicative of possible subsurface oceans. Spectroscopic data obtained by NASA Dawn mission as well as from ground-based observations have found products of aqueous alteration on Ceres’ surface, such as serpentine, ammoniated clays, and carbonates.

Possible scenario for the internal structure of Titan. The figure shows a differentiated interior with a deep interior, an high pressure ice layer, a global subsurface ocean and an outer ice shell. The deep interior can be composed of dehydrate or hydrate silicates (Mitri et al. 2014). Credit NASA/JPL -Caltech/SSI/Univ. of Arizona/G. Mitri/. 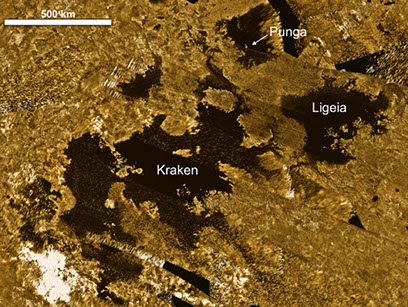 from their early history including the evolution of their interior, the formation of the oceans and the volatile cycles when present. Ocean worlds constitute the greatest volumes of potentially habitable space in the Solar System. Understanding in which context such oceans form during the differentiation and post-differentiation of the ocean worlds and how they evolve are key questions to be addressed in order to assess their habitability. 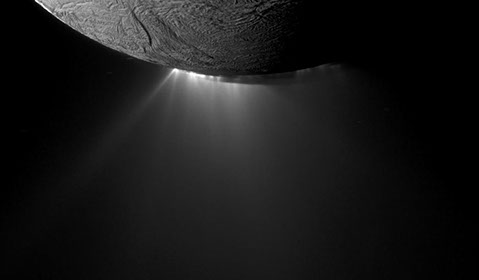